Most forms of masculinity are in flux and often debated today. The goalposts of masculinity keep shifting. These are my thoughts about one aspect of manhood that should remain. A simple kernel of virtue, with a philosophical bent.

Man should hold truth to high esteem as a virtue. The four cardinal virtues adopted by man in philosophy have typically been Prudence, Temperance, Courage and Justice. Truth is often regarded as a virtue as well.

Men who don’t pursue truth, go about their days as a fantasy. When I speak of truth, I mean as in reality – not fabricated.

Truth guides man from where he is to where he wants to be. It allows him to achieve order and harmony in life.

People that choose to escape or disregard truth, their days are done. They become an automaton, easily swayed by the externals of life.

One should pursue what one enjoys but not in disregard to truth. If you stray from it you will be separated from yourself, your goals and your thoughts.

If one seeks to become men from the values of television, movies, and culture – it’s at a loss, it is empty.

I’ve said before people are programmed by culture and propaganda. You can’t run from it.
People won’t know their own thoughts, as if they are a fish in the fishbowl looking for the water. Fish can’t perceive it’s own water it resides in.

Plato’s cave is an example of looking at the bowl of culture, where people are unaware that they are stuck in a cave (culture) and they are unable to see the light (truth). 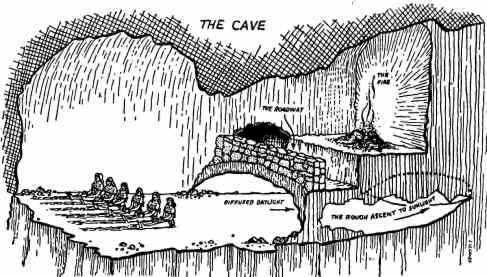 People believe they think for themselves. Unknowing Information is misinterpreted, bent, and half-lies can be told and sold to misinform the public. Everyone is spoon fed truth. The mass public can’t be counted on to experience truth. I’ve come to these conclusions through questioning.

People use television to escape their average day-to-day lives in order have something to do while the clock ticks life away. The internet is the same way with memes, Emotional/Controversial “clickbait” and funny photos until the end of time.

If a man is to inform himself , he must seek truth, finding alternative routes of information. By oneself, thinking critically, experimenting with self-knowledge and truth. There’s no way around it. It should be challenging. Truth is worth it’s price.

Whether it’s their intent or not, your ideas can be bent by media. Politically, ideologically or otherwise. And of course everyone will believe they have the truth.

If you watch television, you are susceptible to infection by “cultural illusion.” Which is a profound aphorism by Terence McKenna I recall.

You are alienated if you do not partake in the illusion. But you will be cleansed and wiser to be above it. It is the real counter-culture, becoming the chess master of the board.

Trivialities separates one from duties and truth. It separates since it allows one to live in a world of fantasy, fiction and fleeting emotion.

A reasonable man cuts away from appearances and distractions for what they are. Illusions and delusions that lead astray, leading to frivolities and a careless life.

For all responsibilities that rests on man’s shoulders, it should be acted upon with the impetus of truth. Using it to dissect and slice matters with reason. Truth in matters of family, relationships, personal and active day-to-day life.

People believe they can get on with their day lying to oneself but the issue lies with man rejecting truth.

One that rejects objective truth is in denial. In denial and absence of truth there is disharmony and disorder.

Man that is honest with himself, free from self-deception can flourish. Since he is no longer caught by his own BS, or the BS of others. He can take the action to accomplish what he must.

Activities that promote this virtue thus revolve around gathering truth from oneself or harnessing truth from others. These activities in combination to one another will increase the level of order in a mans life.

Examples of these activities include but are not limited to the following: Fitness, Reading Classics, Martial Arts, Yoga, Meditating, Informative Reading, Critical Debate etc. Through procurement of these skills one will begin to understand one’s self while also gathering a sense of truth and self-knowledge.

Whether reality feels as a corrosive punch to the gut or a feather bed. Man will lose his sense of purpose if the truth is not seeked in this culture that promotes poor forms of critical thinking or un-thinking and absurdities.

It is essential to uphold virtue of truth along your goals, thinking critically, and holding on to your vision, leaving to dust men and their “truths.”

There is nuance in my writing and much more to be spoken on this topic. But I hope you enjoyed the post.

Here is Bruce Lee on how to know what is true and coming to terms with truth and making it your own.